With the presidential elections this year, the exciting primaries including characters like Trump and Sanders, and now the dead or judge Scalia, possibly allowing Obama to nominate another Supreme Court judge, American politics could change along a number of interesting paths. Yet, the most pressing issue is often forgotten amongst partisan rhetorics – the tedious political struggle accompanied by bipartisan governments.

This post was inspired by another article I recently read about the state of the Democratic party. The author essentially claims that the Democratic party is doing horribly bad, with Republicans succeeding in local elections and Democrats clinging to the White House by a thread. There are some points to this; but looking at the number of offices held by a party does not necessarily tell us a lot about their power. So I tried to define partisan power in the US and came up with something like this. 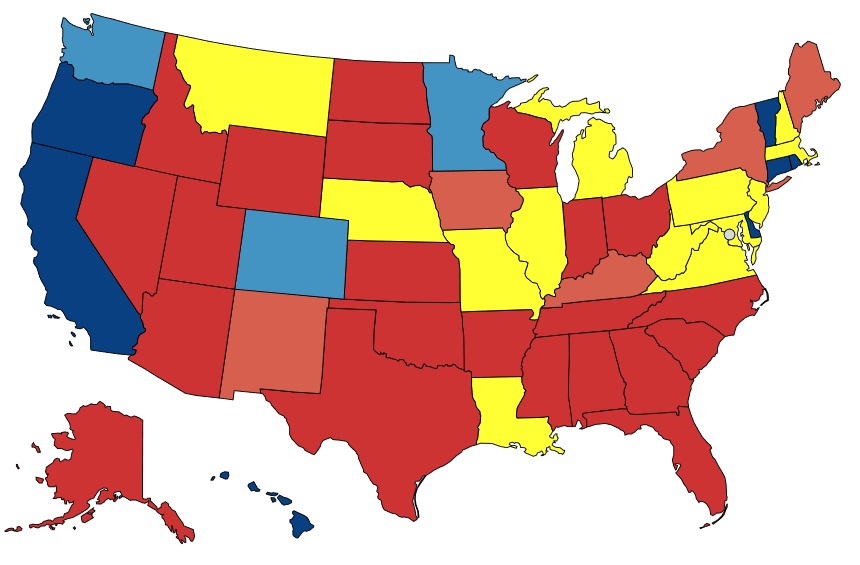 Yellow are states with a stalemate, dark red and dark blue states where Republicans (red) or Democrats (blue) are clearly dominant, and the lighter shades indicate a relative power balance in favor of either party. The first step was finding out who governed in what state; thankfully, the US publishes a comprehensive list of legislative and executive power in individual states. In that list, the only distinction is between full control (i.e. one party has a majority in both houses and the governor ran under the party’s banner) – but that did not seem right to me. If a party, like the Democrats during Obama’s first term, have a majority in one house and the head of government, they can pass laws and push through the other house eventually. A situation with a stalemate between the Senate and the House should be considered different from a situation where both houses unite against the president or governor.

In order to accommodate this, I distinguish executive power and legislative power. Assuming that the separation of power in the US did work out well, I consider them equally strong (an oversimplification, but it works). If that is the case, then, a true stalemate is only reached when one party controls the legislative (i.e. both parliaments, except for Nebraska, the only US state with a single parliament) and the other party controls the executive (i.e. the governor). Then, we have cases like Alaska, where Bill Walker ran as an Independent and had a Democratic running mate; alas, he was elected in 2010 as a Republican candidate, maintains ties to the Republican establishment and will have to cooperate with a Republican-led legislative. Due to this, I consider Alaska a “Republican” state, but you are welcome to convince me otherwise.

In short: I looked at the governor, and the party he or she belonged to scored one point. Then I gave the party with control over either house of parliament 0.5 points (except for unicameral Nebraska, where there is only one house worth a full point). If tied, the state is yellow, one point means light shade, two points equal dark shade. The I went along and did the same for 2009. 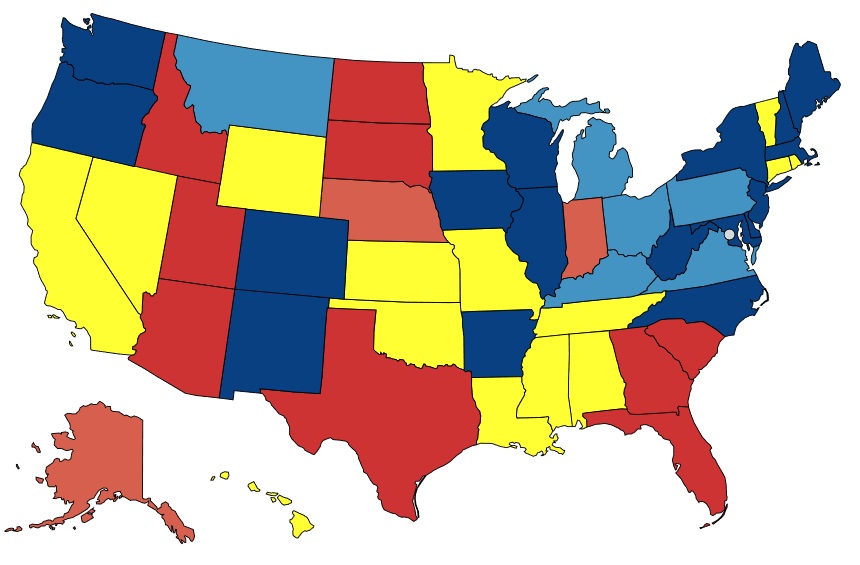 Comparing both years, it is hard to see how the Democratic party is in a situation much different that of Republicans in 2009. Lets have a look at the distribution of these categories: 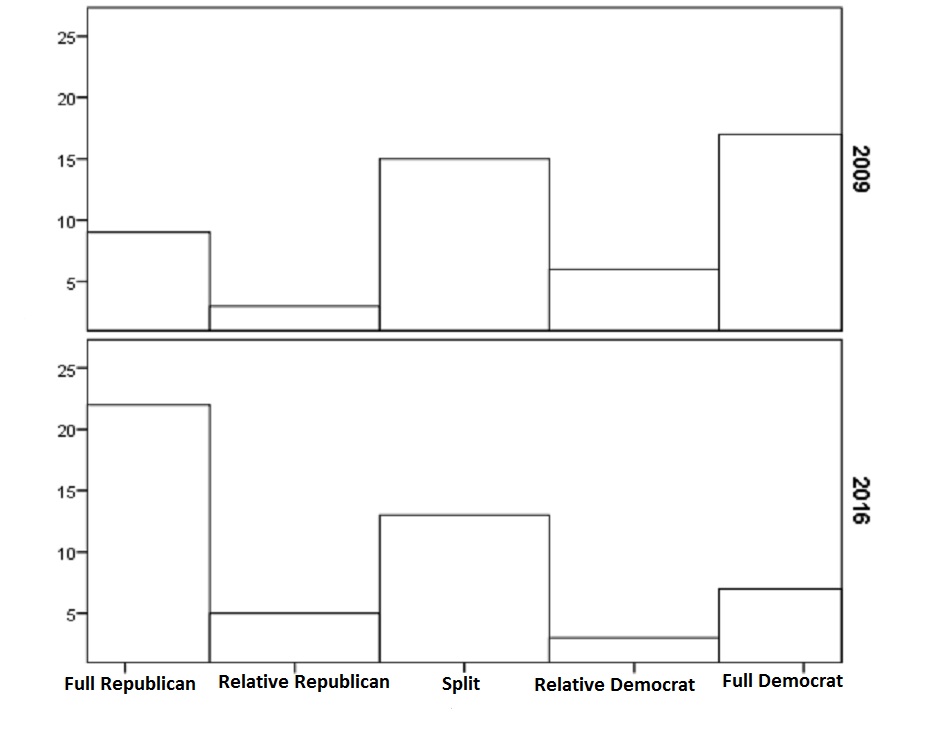 As we can see, the situation has reversed since 2009, nothing more, nothing less.

While that means that the situation is not too dire for the Democratic party in general, it does raise some questions about their chances at keeping the White House. Obama’s electoral success was preceded by a similar rise of the Democratic party in the states as the Republicans have seen in recent years. Careful planning in the states was key to electoral success on the federal level; something the Republicans may be replicating.

Another striking feature: Republican successes in recent years where not necessarily due to their own strength, but mainly due to Democrats’ weakness. Look at the yellow, stalemate states: During the Bush presidency, many core Republican states fell in that category. Republican gains occurred largely in those states in the central US, while more stalemates are now existent in the North-East, in core Democrat states. The closest they have come to full control over both the legislative and executive in a Democratic stronghold is in Wisconsin, where Scott Walker seems to do quite well.

It will be interesting to see how this plays out in the coming elections. If Republicans manage to take the White House, Democrats can be expected to “swing back” states easily. Either way – the Democratic party is neither underperforming not outperforming, but rather doing pretty much as well as to be expected.