The dominant theme in last year’s coverage of Germany and migration was simple: A broad societal consensus, with the two major parties behind Merkel publicly welcoming refugees and working on a diplomatic level in their interest, while civil society actors would help as much as they could. Within that frame it can be hard to see that other side of the story.

The Germany I grew up in took decades to come to terms with it large immigrant population from the post-war decades, changing its definition of citizenship to ius soli (i.e. citizenship is acquired based on ancestry, but birthplace) not as late as 2000, and discussing how its muslim population fit in less than a decade later. There was no German consensus about its status as an immigrant society. And yet, when roughly a million refugees reached the country last year, not only did it spark a lot of support and solidarity from its population – Germany’s conservative chancellor, ruling with a comfortable majority, decided to spearhead that sentiment, throwing her weight behind this seemingly dominant “welcome culture”.

The Merkel years are quite remarkable for Germany’s political culture. The German political system, with its two strong houses of parliament, encourages cooperation across the aisle. But usually, the dominant conservative party is opposed by a similarly strong social-democratic counterpart. Merkel, however, has been elected chancellor by two out three grand coalitions in Germany’s history; from 2005 to 2009, and since 2013. With the opposition relatively small, political discussion focusses on dissent within the major parties within the coalition; even Bavarian politician Seehofer can cause more disruption with symbolic disobedience than “opposition leaders” Bartsch and Wagenknecht from the far-left party “die Linke” (there is no formal position as an opposition leader in Germany’s parliamentary, and they can only claim the title because they technically got 0.2 percent more than the Green party). The resulting cooperative politics during the EU-crisis, full of compromises, gave rise to the far-right, eurosceptic party AfD, promising an alternative to Merkel’s Germany even in their name (it literally means “alternative for Germany”).

Bickering and fighting after they closely didn’t make it into parliament in 2013, the AfD did get lucky with its timing. In 2014, the Pegida demonstrations, centered around Dresden in Eastern Germany, mobilized thousands of people, many of whom openly voiced support for or at least interest in AfD politics. And then the influx of immigrants took place. With Merkel spearheading the welcoming Germany, there was no one left to represent what German president Gauck dubbed “dark Germany” (which is the worst phrasing possible).

In that political environment, it is not surprising that positive reports dominate. It does create a certain perception of publicness though: If you don’t like immigration, and your whole social circle does not like immigration, then you must feel quite alienated from public opinion. Someone who participated in Pegida protests may easily forget that there are another 80 million people NOT demonstrating against immigrants and PoCs, and be tempted to consider these 20.000 people THE people – after all, they do lack representation.

Who needs the dark side, anyways?

But that does not mean that those people are gone. Remember: Germany is the country where violence against refugees surged in the 90s, post-unification, and drove politicians to reform asylum laws. It is also the country where only recently a racist/nazist terrorist group was discovered, killing 10 people in the last two decades. In the 90s, the public discussion was defined by statements such as “the boat is full“, the opposite of the situation now. And this time, a hugely popular chancellor backed by a comfortable majority is actively supporting refugee rights.

In this situation, parties can afford to ignore parties like AfD, going as far as refusing to talk to them in public debates. What is meant as a delegitimization may easily backfire, however; rather than unmasking their increasingly racist ideology, possibly convincing people to vote differently, AfD may benefit from a perceived victimhood – polls indicate results of up to 10 percent in the upcoming state elections.

Alas – until the next elections in 2017, the AfD is kept at bay and could actually be successfully ignored. They internal divisions and splits mirror those of the pirate party, who, after a similar rise and successes in state elections, are now close to irrelevance. The voters exist; the party exists; but they are not underreported because of some mean “Lügenpresse” (“lying media”), but because they are relatively irrelevant for German politics and will remain so as long as they have neither political partners nor federal representation.

Welcome: some neighbours will give you clothes, some will burn your house…

But if opposition to immigration is not an issue in parliament, and the only party with a chance at making it one might vaporize before it gets a chance to, then what to do? An alienated firefighter like that may, for example, lay fire to a refugee house. Someone else may throw a hand-grenade at a refugee center (possibly also targeting policemen). 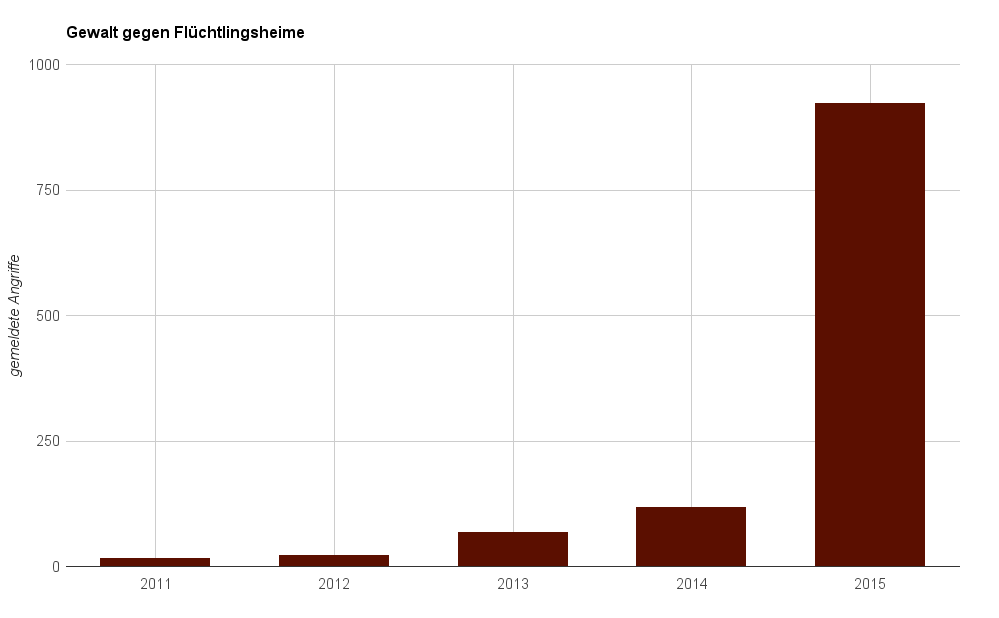 According to this article, some people may not even consider their acts illegitimate; they may think that harming non-inhabited refugee houses is not that bad, resulting in more people not associated with the far right participating. The numbers, however, suggest a possible radicalization – after all, non-violent crime against refugee houses (like smearings) have “only” doubled, unlike attacks, including arson (see chart above). And that number may even increase. Rightwing violence may become a huge challenge for the authorities; already, most investigations do not find much. If people without obvious links to criminal, extreme networks participate, the police has few reliable ways of solving cases.

This is the other side of Germany: People are not only compelled to help, they are also compelled to attack, smear on or lay fire to refugee houses (and we are talking only about reported cases). It is something that was hard to fully comprehend out during the euphoric welcome rituals last year (even though it was definitely reported). When the cologne attacks happened, there was this sentiment that now refugee politics will be seen in a different light, that now, Germans may change their stance and racism will resurface.

But looking at the number of attacks in 2015, I feel like this was never gone. For one blissful year, we could however successfully ignore it and enjoy Germany being a country full of refugee activists.

One thought on “Let’s talk about that “welcome culture””