Well, it looks like the United Kingdom is leaving now, and while everyone in the Bremain-camp is shocked and worried, the shocking and worrying has only begun. The next three to five years will be full of uncertainty and interesting possibilities. 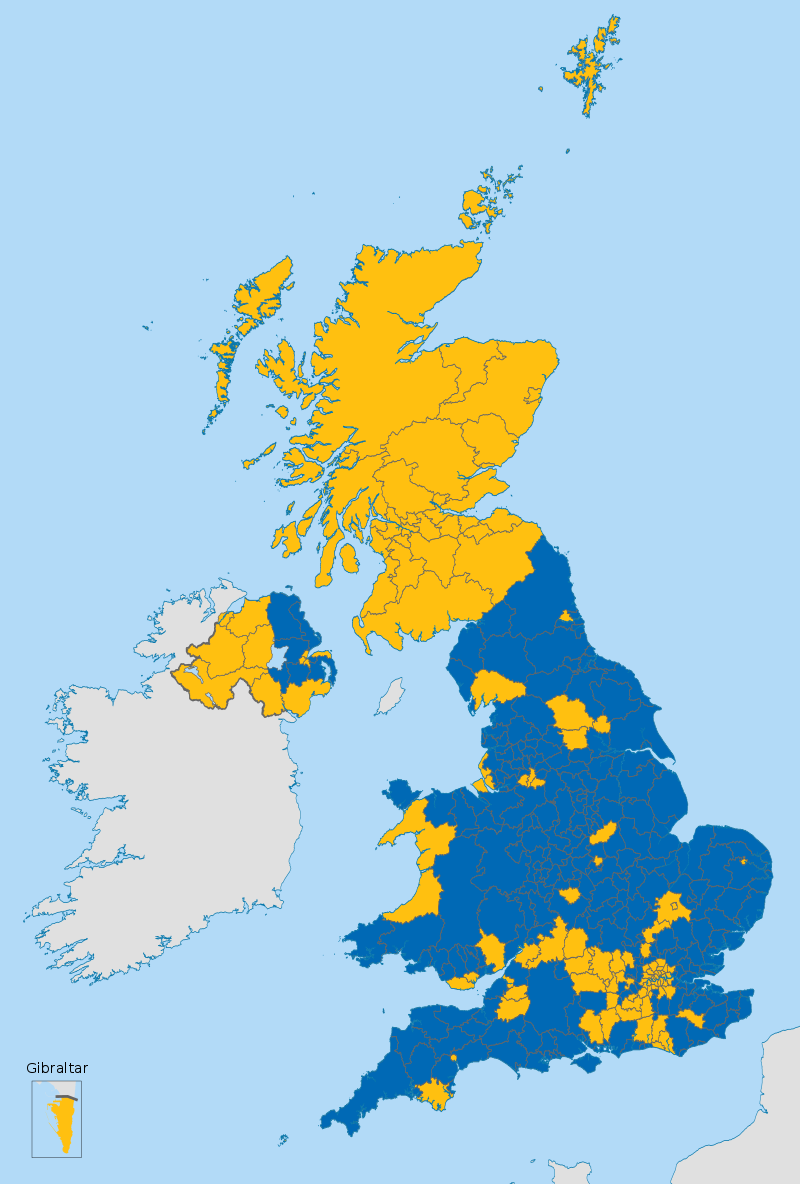 The Brexit is obviously a very English issue – Scotland, Northern Ireland and Gibraltar were much more hesitant to leave the EU. And that, of course, is causing some dissent.

Will the Scots finally secede?

Most comments seem to consider this a given. Of course, Scottish Prime Minister Nicola Sturgeon was very eager to point out that the Scottish vote indicated a clear preference for the EU: 62% voted in favor of “Remain”. Almost all major Scottish politicians have voiced concern about the results, and former Prime Minister Alex Salmond repeated his previous statements that a vote to leave the UK would be a major deal-breaker and would allow Scotland to hold a second referendum about its own independence.

First off, Scotland’s right to call a referendum unilaterally is questionable. To put it mildly: UK-Leaders seem unlikely to support anymore referendums for now. And with Cameron resigning in October, it is unclear who would make that decision in Westminster. So Scotland might be facing much more of an uphill battle than in 2014 – it may have to get creative in holding a referendum that will be questionable in terms of its constitutionality. Or it waits until another SNP landslide in 2020 and risks losing momentum.

And even if the referendum is held (which seems rather likely), the tables have turned much. An exit from the UK would be much less smooth now than it would have been with both countries in the EU. Hard borders might be in place, Scotland would definitely have to lose the pound (and probably take on the Euro), and its economy, strongly entangled with the British, would face major challenges. Would the Scots vote for independence under these circumstances, when they did not do so under much more favorable circumstances in 2014?

It all depends on how important the EU issue is. Yes, most Scots supported “Remain”, but that does not mean that the issue is as important to Scotish voters as Salmond might have you believe. A lot will rest on Scotish Labour as well – if they joined the referendum camp, an exit from the brexit might actually happen.

Something that has been pointed out by Bremain repeatedly: If the UK wants full control over its borders, then it won’t get a lot of the advantages of the EU, including economic access. It also means that there would be a hard border to the Republic of Ireland (you know, that part of Ireland the English seem to frequently forget about that is not in the UK, but in the EU).

Ireland has strong trade links to Britain, something worrying its government and companies alike. A hit to the pound would decrease profit from their exports to the UK, a hard border would damage their ability to trade freely, and possible create additional costs. Add to that the issue of Northern Ireland, where free movement between both countries allowed families to settle in both Irish states, and you have some personal issues as well. No wonder that 56% of Irish voters were in favor of staying.

And yes – Northern Irish Depurty First Minister Martin McGuiness has called for sort of a mini-referendum, i.e. a “border poll on a united Ireland” that would leave the border between the two Irelands the way it is. Now, this would leave the UK without the full control over its borders that Brexit-campaigners have fought for – so it might result in more border control between Ireland and the rest if the British isles. This may be no surprise coming from a politician from Sinn Fein, and it will be interesting to see what First Minister Arlene Foster will have to say on the matter – but tensions might be rising there, too.

With Scotland and Northern Ireland unhappy about the result, there is one upside: At least Wales seems contempt with 52.5% of voters voting for “Leave”. As for the EU, there is finally a test on how leaving it will affect a country. Over the next years, we will learn a lot. Will the predictions about economic hardships or national self-determination come true? We live in interesting times indeed.