Uber has been fairly big in the media: They are apparently giving cheap transportation to people who could not afford it otherwise, and they are killing cab drivers simultaneously. One thing I have been wondering though is: How can they be so cheap?

Now, this is getting a little bit tricky. Uber has different price models in all kinds of cities. Sometimes this is because of local legislation, sometimes because some models pay off better than others. This makes it very hard to actually compare cities, and to find out how much a Uber driver makes. This is based on public numbers, but also a fair number of assumptions on my side.

First of all, I have looked at the cheapest model for 3 different cities: London, Munich, Düsseldorf. D-Town is nice and easy: You pay per km. Munich is more complicated, so I added an estimate of waiting time (you pay an additional 15 ct per minute). As for London, I just assumed that you will always be faster than 11 m/ph, which is not true, but makes this a lot simpler. That way, we end up with this kind of income for a single ride: 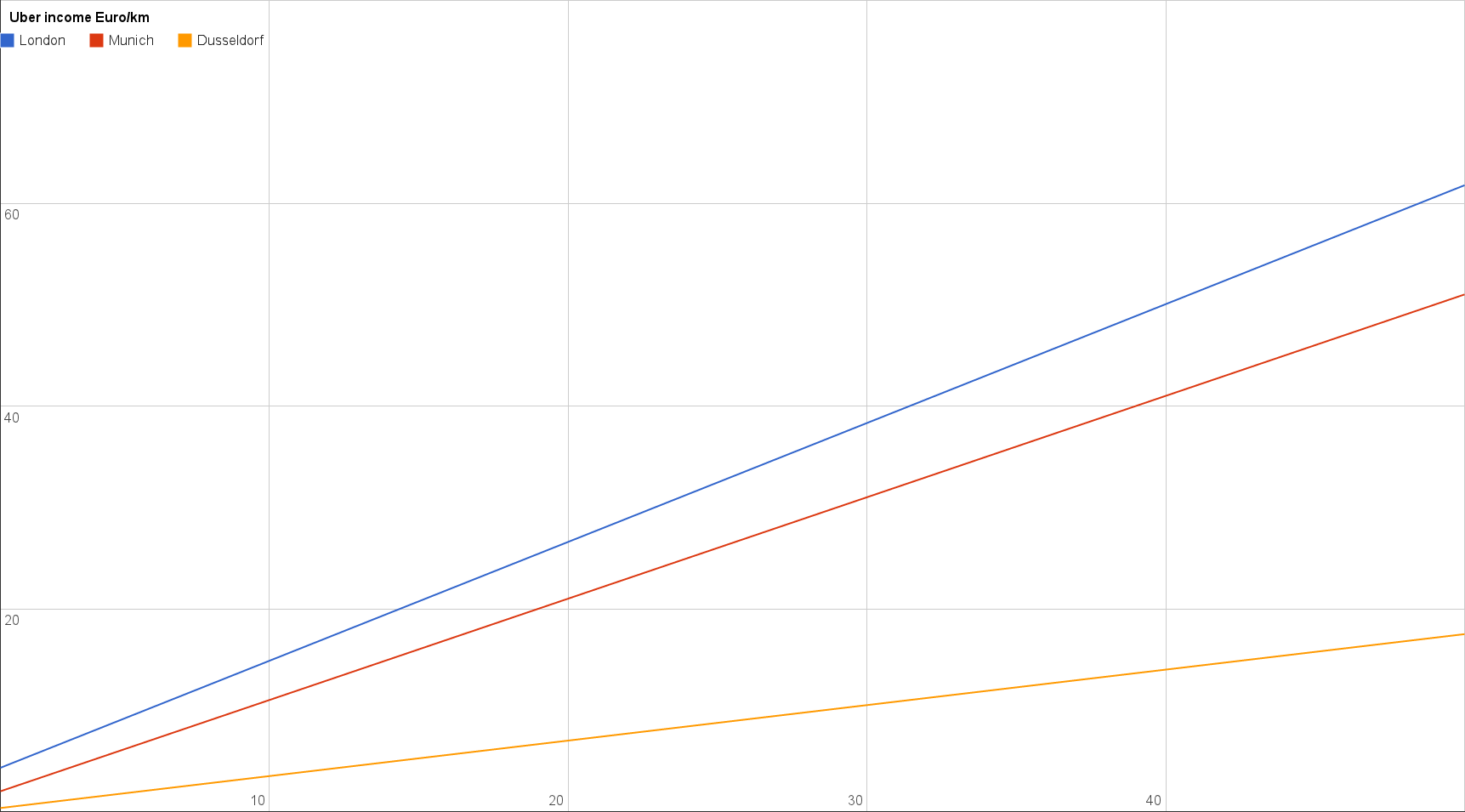 Note: These numbers are all in kilometers and Euros, I adjusted the numbers for London accordingly. One thing we can already see: Düsseldorf looks bad. For a ride of 50km, you would get paid something around 18 Euros. London and Munich look a lot better, with 50 to 65 Euros.

However, using a car is not free. You pay for gas, and you pay quite a bit, despite low prices right now. Also, you have to pay a commission for Uber, another thing that I found hard to estimate. Yes, Uber gives official numbers, but apparently, they change frequently, with discounts and so on. Additionally, they have introduced all kinds of other costs for drivers, like paying for the phone they borrow you. So simplify, I have assumed a 20 percent commission for drivers; that should be a good average. So if we include gas prices and commission, it looks a bit different. 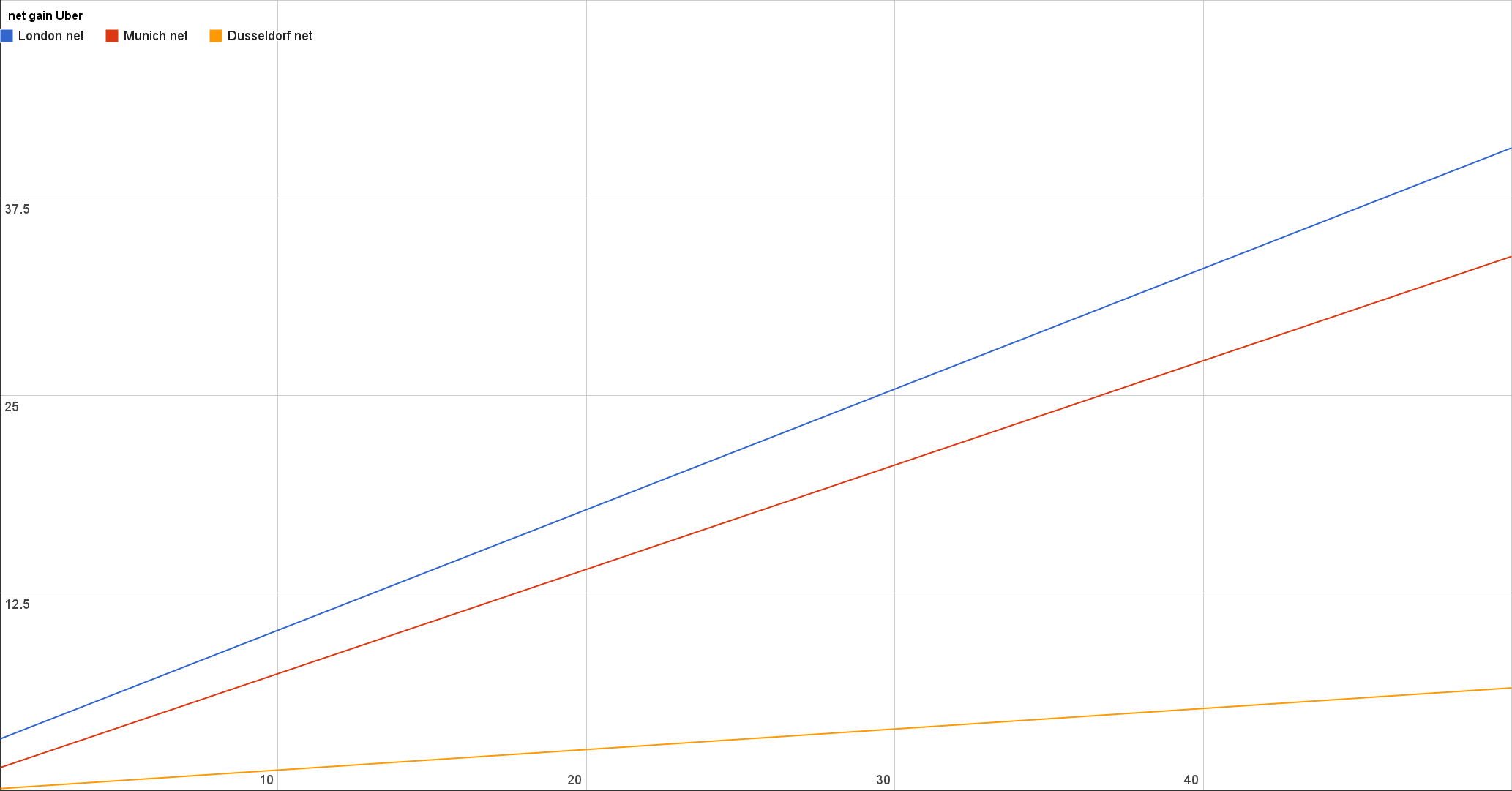 That is a net income of 40-45 Euros for Munich/London drivers, but less than 10 Euros for drivers in Düsseldorf (remember: for single rides of 50km only). However, most of the time, you will not get a 50km ride; you will get multiple rides over shorter distances, which then increases gas consumption and waiting times. Lets say you want to make at least 10 Euros per hour; if you are based in London, you would need a 10km ride every hour. In Munich, you would need a 14km ride every hour. London seems manageable, Munich less so. In Düsseldorf, it is virtually impossible.

Remember: That 10km ride might only take 30 minutes, but you have to get there and back to wherever you live. So if you have a seamless stream of rides in London, then you can make 10 Euros (or 7,5 pound) and hour. Otherwise, you are well below that – including waiting times, it will be hard to make that kind of money. For Munich, this is only more extreme.

Additionally, using your car devalues your car, increasing the costs for you. This depends heavily on your car and how you use it; but car maintenance should be kept in mind when considering to work for Uber. You might want to also include things like car insurance, although you will probably have this anyways.

To some it up: Unless you are very lucky, Uber does not earn you money. In Düsseldorf, you will probably be happy to break even, in Munich, you will work for well below minimum wage. Only in London will you, maybe, be able to get something out of driving for Uber. Unless they change their commission rates again…